Leave a comment Posted by Leah Darling Roberts on August 30, 2015 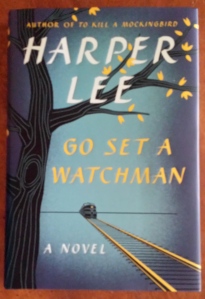 It’s been six weeks since the much-hyped release of Harper Lee’s second book, Go Set a Watchman. I pre-ordered the novel months in advance and couldn’t wait to get my hands on it. To Kill a Mockingbird is one of my favorite books, and I’ve longed for a sequel since I first read it at the age of nine.

Unfortunately, due to a delay beyond my control, I was forced to wait three weeks after its release before my copy arrived. Long enough to read the negative reviews and almost wholehearted condemnation from fans and critics alike. I became apprehensive. Would the alleged rough draft of Mockingbird be a letdown that shattered my love of the beloved classic and its characters?

Most of the criticism concerned allegations of racism, particularly on the part of the character Atticus Finch, the lawyer father of Jean Louise (Scout in To Kill a Mockingbird), who risked everything to defend a black man wrongly accused of rape in the original novel.

After reading Watchman and rereading Mockingbird, my fears were put to rest. Mockingbird is a better book, hands down, but I don’t think Watchman is horrible. If Lee’s editor had published Watchman, instead of encouraging her to rewrite it, it would have been an enjoyable read, typical of its time, before fading away into obscurity. It might have achieved book-of-the-month club status, but it never would have become a Pulitzer Prize winning classic.

We have Lee’s editor at J.B. Lipincott & Co., Tay Hohoff, to thank for that. Hohoff recognized the message Lee was trying to get across but felt the manuscript was not yet ready for publication. During the next two years, she led the author through a grueling rewrite process, helping her whittle the story down to its essence.

I don’t believe Lee was racist at heart. Watchman’s protagonist, Jean Louise, is appalled at the racist attitudes embodied by the people in her hometown. She is willing to abandon her father, beloved uncle, and boyfriend when she discovers they are members of a citizens’ group whose sole purpose is to prevent government mandated integration of the local schools. She’s even more horrified when she learns her father was once a member of the KKK.

We eventually learn that Atticus’ involvement in the Klan was limited to one meeting, many years before. His sole purpose in joining was to learn the identity of the cowards behind the masks so he’d know who he was fighting if push came to shove.

His membership in the citizens’ counsel is more problematic, but I think it reflects his values more than the author’s. Jean Louise is the character readers identify with. Atticus is presented as a complex product of the early 1900s Deep South.

The messages expounded in Go Set a Watchman (equality, love, compassion, standing up for what is right, etc.) are the same messages set forth in To Kill a Mockingbird, but they are muddied because of the contradictory personalities of Atticus and Uncle Jack. Atticus’ arguments against integration, along with some of Lee’s descriptions of people and settings, are reflective of a 1950s southern worldview. Enlightening from an historical perspective, albeit highly offensive today.

We must remember that Watchman was written before Mockingbird. Atticus is a fictional character. He didn’t morph from a wise, saint of a man into a conflicted racist. His character started out weak and was honed into the Atticus we know and love through several rewrites, over a two-year period.

To Set a Watchman is written from the point of view of an adult Scout reconciling childhood memories of her father (including his defense of the unjustly accused Tom Robinson) with the hypocrisy she discovers in his current life. To Kill a Mockingbird, which is written in the present tense to give it immediacy, takes place during Scout’s childhood, during the time of the trial. The message is the same in both books, but while Watchman offers a panoramic view of the theme, Mockingbird zooms in with a telephoto lens.

In the long run, Watchman will probably fade away and Mockingbird will endure. Should Watchman have even been published? It depends on who you ask. Lee’s relatives claim she wasn’t fully aware of what she was getting into. Her lawyer denies this. Critics and fans alike clamored for its publication and then slammed it once it arrived, comparing it with the original (perhaps unfairly?) and finding it lacking. It’s rough, no doubt about it. As an author, I cringe at the thought of any of my rough drafts being published, but assuming I’m still alive, who knows how I’ll feel in fifty years. Like its predecessor, Go Set a Watchman has generated both controversy and discussion. And in the end, isn’t that the point? 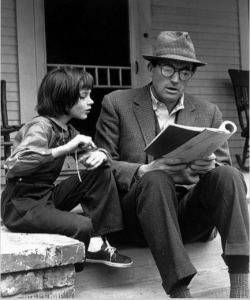 Gregory Peck and Mary Badham as Atticus and Scout Finch in the 1962 Film, To Kill a Mockingbird

Uncategorized
← Blame it on the Books Labor Day Movie Marathon →